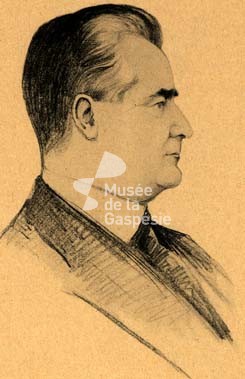 Visited: 36 times
Order
[190-]-[191-]. - John Hall Kelly was born in St-Godefroy, in the Bay of Chaleurs, on the 1st of September 1879. His parents, Mancer James Kelly and Sarah Bridget Hall, were of Irish origin. He studied at Levis College, in Memramcook, and the Faculty of Law of Laval University. Passing the bar in 1903, he chose to come back in the peninsula, settling in New Carlisle. In 1904, he married Marie-Adèle Dionne, daughter of Léonidas Dionne, lawyer, and Maria Lamontagne. In his second marriage, he wedded, in 1928, Eleanor Louise Parmelee, daughter of George William Parmelee, director of the Protestant Education Board of the Province of Quebec, and Mary Louise Foss. Brilliant lawyer, his name is associated with Dominique Lévesque, father of future famous Quebec prime minister René Lévesque. Specialising in cooperative law, he represents many prominent clients and American companies established in Quebec. As a businessman, he was named president of more than one company, namely Bonaventure and Gaspé Telephone, New Richmond Mining, Paspebiac Mines, and many more. In 1904, he was elected MP for Bonaventure in the Legislative Assembly. He participated in the establishment of the pulp and paper factory in Chandler, in the promotion of the mining projects in the Gaspé and in the building of covered bridges in the region. He was named as legislative council in April 1914, and by 1935, he became a minister without portfolio in the cabinet of Alexandre Taschereau. Four years later, the Canadian government makes him the first High Commissary for Ireland. He then gives up his seat in the Legislative Assembly, which he held up for 25 years past. He died in Dublin on the 10th of March, 1941, and was buried in the Glasnevin Cemetery. This drawing is part of a collection of etchings of Quebec politicians from the 20th century, including Gustave Lemieux and Jean-Léonide Perron. Musée P131 Fonds famille John Hall Kelly P226 Fonds Union régionale des caisses populaires Desjardins du district de Gaspé